There was a recent twitter exchange between a Muslim from Saudi and Elon Musk regarding the topics of Death, Salvation and Hell. This exchange garnered mixed reactions and was a topic of discussion in some quarters among the faithful and the faithless.

The context of the exchange can be seen in the below image: 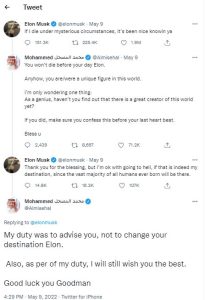 I had the following reflection in light of the Quran.

Elon Musk tweeted: “I’m ok with going to Hell, if that is indeed my destination, since the vast majority of humans ever born will be there.”

Strangely enough, there are people who believe that since many will be in Hell, they do not mind being there too. They make light of eternal punishment, since they will have company and all will share in the torment. What’s the big deal, right?

This sentiment may be true regarding worldly and temporal punishment but it does not hold true for eternal punishment in the next life.

Imagine a student in a class who got a bad grade on the final exam. Then, he found out that all the students in class got the same bad grade. This reality of having company consoles him emotionally regarding his bad grade. He may find comfort in this instead of blaming himself and self loathing. They say, “Misery loves company.” People who are unhappy may get some consolation from knowing that others are unhappy too.

One of our scholars, may Allah grant him wellbeing, commented that our Lord, the most sublime, informs us that even this type of ‘consolement’ and ‘emotional comfort’ due to being partners in failure and misery, is not obtainable to the people of Hell. All forms of comfort will be withheld from them.

His evidence from Scripture is Allah’s statement in the Quran,

“It will be said to them, ‘You have done wrong. Having partners in punishment will not console you today.’”(43:39)

From a worldly perspective, many people are comforted when they hear of others who went through similar trials as them. But this will not be the case on Judgment Day. Everyone will be desperate to save themselves from the punishment, regardless of others.

How scary is it that even this small psychological comfort in having company and sharing in the misery and pain will be off limits for the dweller of the Fire?

May God protect us from the Fire and from being of its dwellers. We seek His refuge.

Underestimating and belittling the punishment of Hell is not something new. The Quran affirms that it is an ancient characteristic of the disbelievers by quoting their responses in multiple passages.

The root of all this is utter arrogance and complete willful ignorance of the Hereafter.

“Their knowledge of the Hereafter amounts to ignorance. In fact, they are in doubt about it. In truth, they are ˹totally˺ blind to it.” (27:66)

The idea of contentment in being with the majority of people is ironic for someone like Musk. He always has had novel, unique, sometimes far-fetched ideas – seeking life on other planets, designing spaceships, and a very successful venture, making electric cars, when people had been quite content with gasoline. He’s a trailblazer – certainly not one satisfied with being part of the mundane majority and accepting to be part of the status quo.

May God reward the brother for his words of advice and may He guide Musk to the Truth. May Allah make us a means for guiding others and may He make us of those whom he selects to truly know the Hereafter and to gain Salvation and be winners and successful therein.

“We truly chose them for the honor of proclaiming the Hereafter. Preparing for it through good actions and calling people towards it. In Our sight they are truly among the chosen for My obedience and worship and the finest selected to bear My message and convey it to the people.” (38:46-47)

Subhaana Allah I’m always happy when i see a Saudi doing Dawa ma Shaa’ Allah. May Allah bless those who share Islam in an honorable, positive and gentle way Al Hamdulillah for gentle Saudis. Makes us think of our Prophet ﷺ